The Stockholm City Library – Extension of the Asplund Building

Referring to Asplunds „Temple of Books“, the main part of the extensions is accommodated in buildings which likewise can be described as archetypes: propylon, stoa, terrace and stairs allude to ancient sites on the hillside – like Pergamon or the Akropolis in Athens – but with its perforated and translucent surfaces in an explicit contemporary interpretation concerning detail and materialization. „Propylon“ and „Stoa“ as prominent elements form – together with the Rotunda of the Asplund Library – an ensemble of landmarks both visible from Observatory Hill and the adjacent streets.

The designs intention is to avoid an unbalanced confrontation of the existing buildings (in particular the Asplund Library) with one huge new  complex. Instead of this a series of related elements gathers as a „form family“ around the hillside which when occasion arises can be expanded in the future.

The main entrance of the library will be situated on Odengatan in the central axis of the complex between Sveavägen and Gyldéngatan. An (anew) extended finger of the Stockholm Ridge renders the former site of the city landscape. This finger, a tube as prolongation of Observatory Hill with a surface to walk on, allows the extention of the upper park level to the alignment of Odengatan where people have a magnificent view of Odenplan and the Gustav Vasa Church. The front of the „Ridge Finger“ recalls the Asplunds Library portals in a larger scale. It invites the future streams of people to enter the high entrance hall from where a bridge gives access to the „Temple of Books“ and a „Stairway to Heaven“ opens up the upper parts of the library.

Referring to Asplunds plans, in the axis of the opposite street an outdoor flight of stairs – on the terraced building next to the „Ridge Finger“ – leads parallel up the hill, just as the wide stairs integrated in the „Stoa“ on Gyldéngatan. There, on the interface of Odengatan, Observatoriekullen and the commercial estates with access to Metro and City Express Railway, an open round-the-clock entrance to the Learning Zone is situated.

Another important entrance is situated on the upper level of Oberservatorielunden: the „Propylon“ accommodates Café, Lecture Halls, Studios and Teaching Rooms and a terrace upon the bridge between „Propylon“ and „Stoa“ (The Learning Zone) enables the visitors to study and relax outdoor inmidst the park, with a beautiful view of Asplunds Rotunda and the rest of the town. 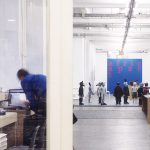